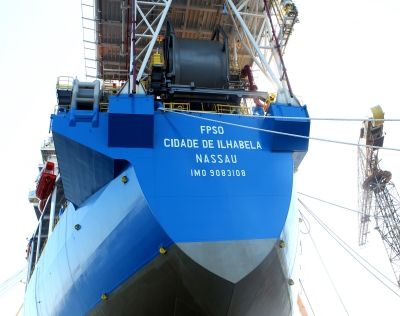 In the process of reaching a new presalt oil production output record, Petrobras has reduced the time required to drill wells into the presalt. This combination is expected to continue rising as a percent of Petrobras' total production to 2018.

In reaching this record, Petrobras says it has reduced the average drilling time per well in the presalt Lula and Sapinhoá fields by 55%, down from 126 days in 2010 to 60 days in 2013. The company equates this to a savings of $66 million per well for the wells which cost about $1 million/day to drill.

In 2013 Petrobras created its Well Cost Reduction Program as part of its 2014-2018 business plan, and expects further reductions in its cost per well over that time. The plan calls for spending $70 billion on exploration and development wells over the period.

Looking back at 2013 results, Petrobras says it had a 100% success rate in presalt wells, finding oil in all of the 14 wells drilled in Santos and Campos basins. Counting all offshore wells, the success rate was 77%.

From 2010 to 2014, Petrobras presalt production grew from 41,000 b/d to the new record level which represents 22% of all its Brazilian production.

Looking ahead, Petrobras expects its presalt production to account for 52% of its total Brazilian production target of 3.2 MMb/d by 2018. At that point, plans call for 19 new production units to have been installed in Santos basin presalt alone.

By the end of this year, two new FPSOs are scheduled to be in production in the Santos presalt, the Cidade de Mangaratiba in Iracema South, and Cidade de Ilhabela in Sapinhoá North. Each is to have a production capacity of 150,000 b/d.

Three added FPSOs are scheduled to be operational in 2016. Those are the Cidade de Maricá in Lula Alto, Cidade de Saquarema in Lula Central, and Cidade de Caraguatatuba in Lapa.

In addition, there are plans for eight "replicant" FPSOs (using the same engineering design), the first of which should produce its first oil in 2016 in the Lula South area. The first of the four FPSOs scheduled to operate in the Cessão Onerosa region is also scheduled for 2016 in the Búzios area. To complete the 19 systems planned for Santos basin, a production system will be installed in Carcará in 2018.

Petrobras expects the contribution by these projects to push its oil production exclusively from presalt areas past 1 MMb/d in 2017.